Tropical Storm Nichole and the preceding several days of continuous rain caused the Trent River and all tributaries to rise into the flood stage. We have tried to paddle the Trent since then and are
blocked again and again. So much so that the upper reaches of the Trent are not navigable even with canoes and kayaks.

This is a crying shame to have this beautiful river be unusable. It should be a clear open Canoe Trail its entire length  in Jones County.

But more importantly it should be kept open and clear of all strainers and blown down trees to reduce the flood levels by a foot or more. The Trent rose by twenty feet in places! Every blown down tree and resulting strainer creates a partial dam!

Now, multiply this by the thousands of such blockages (partial dams) on the Trent and all tributaries and you come up with a higher flood level of one to two feet more than necessary.

Imagine the savings in flood damages to homes and businesses and crops this lower flood level would incur.

It is extremely important  therefor that our Jones County Commissioners take immediate action to clear the Trent River and all tributaries and make them free running streams unobstructed by fallen trees and the resulting strainers acting as partial dams.

While taking this action they should also include provisions that will be intact to immediately remove future obstructions as they occur so this extremely high flood level will never occur again.

We are asking Franky Howard, Jones County Manager, to present this proposal to the Commissioners for their immediate consideration.

We moved further up stream and encountered  what you see below. This was at N 3502.19 and W  07728.039. Thanks to Wayne Ryan of Cape Carteret we were able to paddle further upstream. 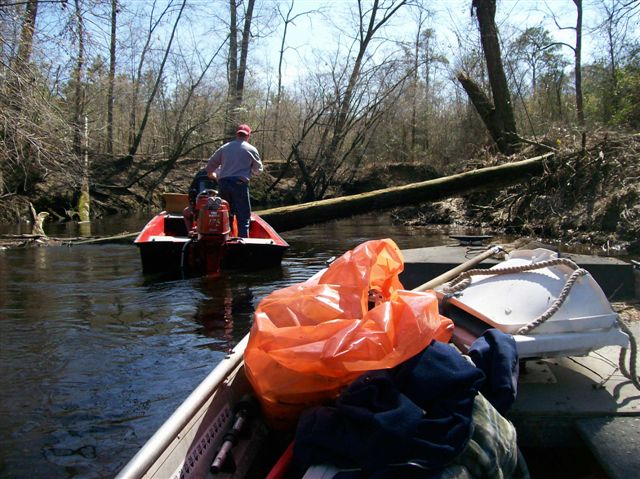 Al Pace of Swansboro helped Wayne and here is the result. 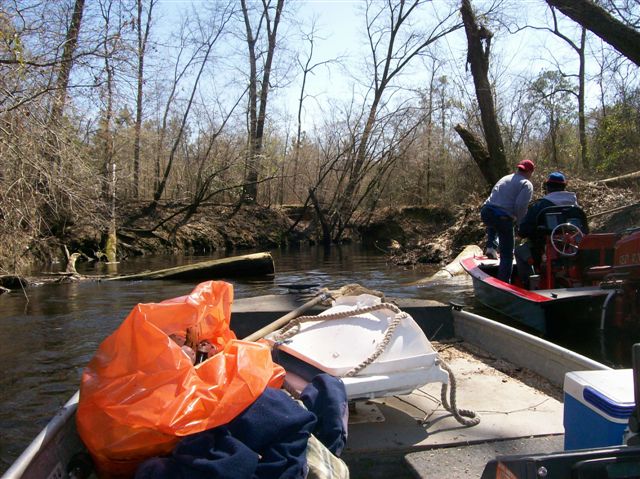 We were able to paddle further upstream to N 3502.1265 W 07728.406 where we encountered another very bad strainer forcing us to turn around.

We made good fast progress downstream where we had cleared past our launching point and were delighted to get all the way to the Chinquapin Chapel Road where the “near Trenton” river gauge is located. A short way past the bridge the river was blocked again and our trip came to and end.

At flood stage during Nichole the river rouse to over twenty feet in places!!

Al Pace if Swansboro accompanied Wayne in his boat. Al will have more pictures for us soon. Elmer Eddy of Trenton rode with Leo Schmidt of Emerald Isle in his motorboat. Leo took three full bags of trash to the dump on his way home.  Bill Murray of Pine Knoll Shores and Scott Brown of Morehead City paddled along with us in their kayaks. Our thanks to all of you.

Clean and Clear Waterways for All!

New to our site? Feel free to look around! If you are Registered, Login below to post Comments. If you are not Registered and would like to Comment, or if you would like to be on our E-mail List, click on "Registering and E-mail List" on the top menu. Thanks!
Purposeful Paddlers, The Waterway Stewards Story
Carolina Canoe Club